Diane Munday was the General Secretary of the Abortion Law Reform Association in the 1960s which helped make the 1967 Abortion Act possible. This piece was originally published by the Independent.

Diane Munday didn’t know what an abortion was until she was in her early twenties. But the need to quickly and safely terminate a pregnancy became a very personal reality for her when she sought out an abortion in 1961, while it was still illegal in the UK. Six decades later at the age of 86, she has made an indelible mark on British society as a pioneering campaigner for women’s rights.

“It was illegal. People were sent to prison for having and carrying out abortions. It was never a word that was said. But having an abortion was a common experience for many. But I didn’t even know what it was to think about it,” she tells The Independent.

Munday was first confronted with the stark reality of abortions when her local dressmaker – a common profession in the Sixties – suddenly died. The young woman’s mother quietly confided in Munday’s mother that she had lost her life after having a backstreet abortion. But what caused her death was never spoken about publicly. To this day, Munday doesn’t know how the dressmaker died.

Diane Munday in her home office in the 1960s

“It was never talked about. All I knew was that she died,” she says.

The dressmaker was one of an estimated 100,000 women in the UK who were forced to seek out an unsafe, illegal abortion, before the Abortion Act 1967 came into force.

“Women would drink bleach to try to induce miscarriage. They would have very hot baths, or move heavy furniture, or try to do it themselves with a needle or a crochet hook,” says Munday.

As a result, an underground network of backstreet abortionists ran quietly across the country. Some of them, says Munday, became involved by force. It was no unknown for women who had carried out abortions for their close friends and family to be blackmailed by desperate pregnant women who threatened to report them to the police if they didn’t help them, too. Like women who had abortions, those who carried out the procedure illegally could be sent to prison.

“These people were unskilled. Some might have had a bit of nursing experience or had worked in a hospital, or carried out procedures for a friend or daughter,” says Munday. 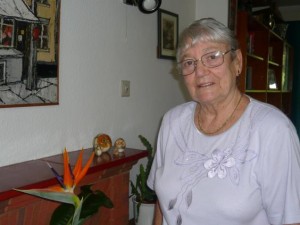 Aged 86, Diane Munday continues to campaign for the decriminalisation of abortion

The shame attached to having an abortion meant that, like the dressmaker, women’s deaths were covered up. To save grieving families from being questioned by the police, doctors would lie on death certificates, stating instead that women died of miscarriages. And hospitals would draft in extra staff on Fridays in A&E departments across the UK to deal with the influx of women being harmed by abortions they sought out on payday.

After the tragic death of the dressmaker, Munday put abortion to the back of her mind. Until she got married and had three children in less than four years. When she fell pregnant with a fourth child in 1961, she simply couldn’t fathom having another baby. Luckily for Munday, she was wealthy enough to visit a Harley Street physician in London who agreed to diganose her as mentally fit to have another child: a privilege she acknowledges simply wasn’t an option for poorer women. The procedure – which would nowadays cost thousands of pounds – was carried out quickly and safely under general anaesthetic. Realising how lucky she was to be alive, Munday pledged to fight for abortion to be legalised. She would go on to become the general secretary and vice-chair of the Abortion Law Reform Association.

As Munday braved being ostracised by her community to campaign for abortion rights, she was surprised by how people responded. Most people, she found, supported her.

“One of my first experiences of going out and speaking about abortion was at a local women’s rights meeting. In the tea break woman came up to me one after another to tell me they had an abortion. They would say ‘I’ve never told anyone before but I had an abortion during the depression in the ‘30s’ or ‘we couldn’t afford another child so I had an abortion’.”

But the red paint splatted across her car, which she was told symbolised the blood of children she had murdered, proved that legalising abortion would be tough.

“Some people shunned me publicly. A shop in the village refused to serve me because the shop-keeper said it was tainted money and accused me of doing abortions on the kitchen table.”

That vocal minority continues to stand in the way of progression, argues Munday.

And asked to describe the stigma attached to abortion in the 1960s, Munday is quick to answer: “there still is stigma.” That’s despite the fact that one in three women will seek out an abortion, and 95 per cent will not regret it.

“I’m very sad that women still feel the stigma. I think this has been one success of the fanatical anti-abortion lobby in this country. With their talk of women murdering their babies they’ve made women who feel it’s all right to have an abortion feel that it’s not. But it isn’t something to be ashamed of.”

Now, the octogenarian remains vocal and committed to seeing abortion laws modernised. Despite being a nation ahead of the curve in legalising abortion, Munday says the UK’s laws are now archaic compared with the rest of Europe as two doctors must give their permission before a woman can have the procedure. She looks towards Canada and northern states of Australia, where abortion has been decriminalised, as examples to follow.

“I’ve always believed that it should be a woman’s decision to have an abortion. I find the current laws appalling. We need to give women the power, not two doctors who might have never seen the woman before, will probably never see her again and know nothing about her life.

“In the 1960s, it was the best we could get. But the laws should have been changed sooner. 50 years ago if anyone had told me that I’d still be campaigning now I’d say they were stupid.”

“People are too important to be born willy nilly because someone the contraceptive broke or because they had unprotected sex. It is irresponsible to bring a person into the world just because they have been conceived.”