Tesco joins Superdrug in slashing the price of Emergency Contraception

Since we launched the Just Say Non! campaign calling on major retailers to lower the price of emergency contraception, both Superdrug and Tesco have halved their prices to £13.50. Sadly, Boots has refused to do the same, stating that they are concerned about being accused “incentivising inappropriate use” and public disapproval. This is insulting, scientifically unfounded, and out of step with public opinion. Click here to tell Boots to review their decision, and “just say non” to this sexist surcharge.

Update: On 21st July, Boots issued a statement saying they were “truly sorry” and looking into cheaper alternatives. So far they have not reduced the price, despite their competitors Superdrug, Tesco and LloydsPharmacy all dropping theirs to £13.50. Click here to keep up the pressure on Boots.

On 29th June, the government announced its decision to provide fully funded abortion care for Northern Irish women who travel to England for treatment. The announcement followed an amendment to the Queen’s Speech, which was tabled by Stella Creasy MP and supported by over 100 MPs from across the political parties and of course bpas. This is a significant step forwards for the women of Northern Ireland but not the end goal, and we will continue to campaign for abortion care to be accessible in Northern Ireland itself. The full govt announcement is online here. Thank you to everybody who emailed their MP – it made a huge difference!

Doctors from the British Medical Association have voted overwhelmingly in support of a change in the law to decriminalise abortion. The BMA’s medical ethics committee chair, Dr John Chisholm, said, “doctors were clear that abortion should be treated as a medical issue rather than a criminal one.” We couldn’t agree more. Click here to join our We Trust Women campaign to decriminalise abortion across the UK.

Over half of the women we saw last year used contraception

Of the women that came to bpas for a termination in 2016, over half (51.2%)were using contraception when they conceived, with 1 in 4 women using the most effective methods – either a hormonal contraceptive or a long acting reversible contraceptive (LARC). Moreover, women using hormonal methods (including LARCs) were more likely to present at a later gestation, as these methods can mask pregnancy symptoms and therefore delay detection. These figures remind us that no form of contraception is 100% effective: women will always need abortion to be available as a back-up when their normal birth control method lets them down.

The Abortion Act: 50 years on

Fifty years after the 1967 Abortion Act was passed, how well does it serve women today? In the week of the Act’s 50th anniversary, bpas will co-present a two-day conference in London to examine its impact, its shortcomings, and the scope for future reform. You can find more information and tickets online here. 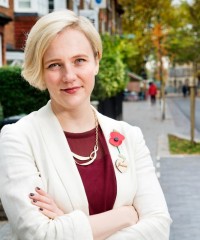 Stella Creasy is the Labour MP for Walthamstow. In June 2017 she was instrumental in securing government-funded abortion services for Northern Irish women who travel to England for treatment. Supported by the bpas My Pledge Her Choice campaign, Creasy tabled an amendment to the Queen’s speech, which was signed by over 100 MPs, forcing the government to review their unfair policy. Writing in the Guardian, Creasy said the 50th anniversary of the Abortion Act, “also marks 50 years of differential treatment for women in Northern Ireland. While the secretary of state may be content to treat Northern Irish women in this way, MPs across parliament are not.”

Theresa May has called a General Election

The UK general election on 8th June could change the face of Parliament. We need to ensure that our next MPs – whatever their party – hear the voice of the pro-choice majority and commit to supporting a woman’s right to choose. So we have teamed up with the UK Friends of Planned Parenthood to launch My Pledge Her Choice – an online tool you can use to tell your parliamentary candidates to commit to three key pledges:

1. Protect clinic access and funding for all UK women – including those in Northern Ireland

3. Support further moves to decriminalise abortion, in line with the Reproductive Health (Access to Terminations) Bill 2017

Women’s rights are on the ballot. We must ensure that our next politicians defend – and extend – women’s reproductive rights. Anything less is not good enough. Email you candidates here – it takes one minute and all you need is your postcode. You can also follow us on twitter here.

Does it matter what our politicians think of abortion?

As the UK election draws closer, the main party leaders’ views on abortion have started to face scrutiny. But do politicians’ personal views matter? bpas’ Director of External Affairs, Clare Murphy, argues not necessarily. What matters is whether they would let their personal convictions stand in the way of a woman’s ability to act on her own.

The Irish Citizens’ Assembly has called for a drastic change to Ireland’s abortion law in a landmark vote. Currently Irish law, which is the strictest of any European country, only permits abortion when a woman’s life is at risk. Women are forced to travel to England for treatment at huge personal and financial cost – or use abortion pills purchased online, risking criminal prosecution. The Citizens’ Assembly has now voted overwhelmingly for constitutional reform, recommending not only that abortion should be legalised in Ireland, but also that it should be accessible regardless of a woman’s reason. Irish writer Grainne Maguire described the vote as ‘more liberal than anyone thought possible’. Whether politicians will act on these recommendations, however, remains to be seen. We urge them to do so.

UK charity Birthrights has launched a new campaign this month, which aims to hold NHS Trusts to account if they don’t allow mothers to opt for a caesarean section. They explain in their press release, “The reasons cited by women trying to access caesareans for non-medical reasons include physical damage from a previous vaginal birth, extreme fear of childbirth, emotional trauma after a previously difficult birth or experience of sexual violence or other violent trauma. […] Birthrights wants to hold to account Trusts that do not give women the individual consideration and respect they are entitled to”.

Meanwhile, Mumsnet has launched a new campaign called ‘Better Postnatal Care: Aftercare, not Afterthought’. Their aim is to focus on several key areas of postnatal care including women’s experiences in hospitals on postnatal wards, maternal mental health, breastfeeding advice and birth injury support. The announcement comes as the Observer featured a harrowing personal account of childbirth and post-traumatic stress disorder, which highlighted the failings of some support services.

This month it emerged that alcohol guidelines for pregnant women may be causing more harm than good as, together with academics and women’s rights advocates, we warned that the official advice to abstain from drinking altogether goes too far, causing needless anxiety. The current advice that even low levels of alcohol can damage a pregnancy is not supported by robust evidence. To overstate the dangers in such a way betrays a mistrust of women and their ability to understand risk, and causes needless alarm, with some women reporting they felt so anxious that they considered aborting a wanted pregnancy, for fear of having damaged the foetus. We discussed pregnancy surveillance, judgement and guilt earlier this month at our conference at Canterbury University, entitled “Policing Pregnancy: who should be a mother?”.

Champions in the news

This month we congratulate Dr Patricia Lohr, bpas’ Medical Director, for her address to the Citizens’ Assembly in Ireland. Lohr presented to the Assembly on the legal framework around abortion and how this impacts on Irish women’s experience of abortion care. You can watch her presentation online here. Well done, Patricia!